The source of information, The Morning Dallas News, reported: “With the support of Pierce-Arrow Co. and General Electric in 1931, Tesla removed the gasoline engine from the new Pierce-Arrow car and replaced it with a standard 80 hp AC electric motor. (1800 rpm), without any traditionally known external power supplies. At a local radio store, he bought 12 vacuum tubes, some wires, a handful of different resistors, and put the whole thing in a box 60 cm long, 30 cm wide, and 15 cm high, with a pair of 7.5 cm long rods sticking out from the outside. Reinforcing the box behind the driver's seat, he extended the rods and announced, "Now we have energy." After that he drove the car for a week, driving it at speeds up to 150 km / h. " 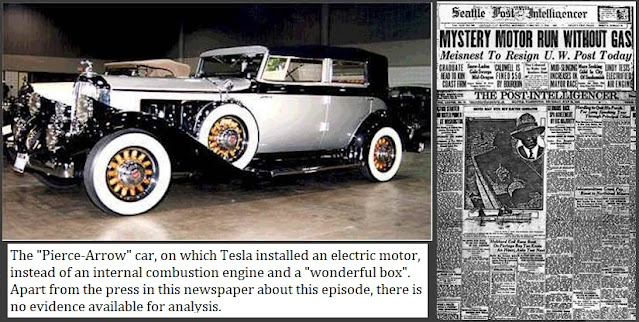 The "Pierce-Arrow" car, on which Tesla installed an electric motor, instead of an internal combustion engine and a "wonderful box". Apart from the press in this newspaper about this episode, there is no evidence available for analysis.

From the point of view of an engineer, installing an AC motor on an electric vehicle requires a serious element called a controller. Well, let's try to approach it from an engineering point of view. The ratio of hp = kW (1 HP = 0.78 electrical kilowatts) respectively 80 l / s = 58.8 kW

Let's find at least an approximate analogy of such a motor for an electric car. The Chinese offer such.

The controller for such a motor is a complex semiconductor power switching device. and the voltage and current ratings for this power are impressive.

I suppose the engineer, just side-stories about 80 hp. and the AC motor, which can so easily be hoisted instead of the internal combustion engine, will be discarded.

Let's digress a little. There is a story that after the Second World War, two American soldiers smuggled to the United States a device resembling an umformer, which they found in the basement of a German house, which was used as an emergency light, without a self-rotating battery, giving out voltage and current for an electric light bulb. John Bedini also got acquainted with this design. Perhaps it was this acquaintance that determined a radio engineer with a good production of audio systems to deal with Free Energy devices.

My story. After high school in 1982, before being drafted into the army, I worked for a year as a car electrical repairman in a trucking company. We had a WWII veteran in our shop, a local innovator. He said that already at the end of the war, after the surrender of Hitler's Germany, in Austria, they captured the Abwehr reconnaissance group. They had a radio station with an umformer, which was launched from a cable and powered the radio station without a battery. Of course, no one believed in this story and they laughed at him slightly, writing off the strangeness of the old man. He was making something. Now I can understand what was trying to build, this veteran.

The third story is not mine ... about how one electrical engineer in 1945, took part in the ferry from an underground dock in the Baltic, to be loaded onto a ship, a German single-seat electric combat submarine. And he assured that the electric motor received an electric current from the generator, which rotated itself. These are three interesting episodes from the past of German scientific and technical thought.

We may or may not believe these stories, but they exist.

And so we return to Nikola Tesla. At the end of the 19th century, at the American Institute of Electrical Engineers at Columbia College, May 20, 1891, he demonstrated an electric machine single-arm converter (motor dynamo) with impressive performance. 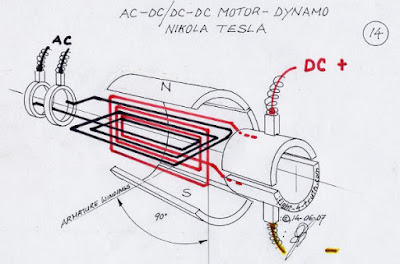 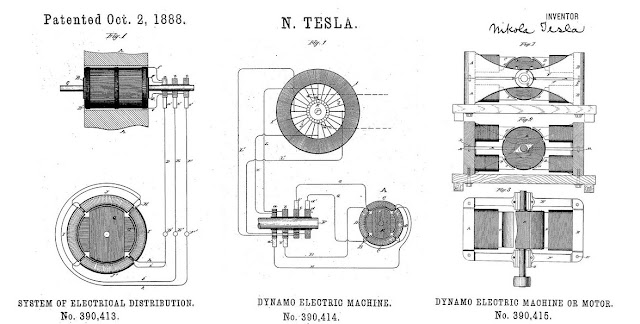 Let's look at another example. At the end of the 19th century and the beginning of the twentieth century, it was electric cars that were widespread in the United States.

As an engineering solution, elegant and balanced. The heart of the electric vehicle was a DC collector motor, which was controlled through a resistive controller (used in electric vehicles until the advent of semiconductor devices). There was even regenerative braking.

Suppose that Nikola Tesla, instead of a DC motor, installs his own dynamo motor on an existing electric vehicle and receives a controlled torque on the shaft and alternating current on removable rings.

With a little analysis, it becomes a very real and possible picture of the possible design of Tesla's electric vehicle. The question remains, why Tesla made a self-charging electric car and why he destroyed it, we do not know. Suppose he needed money for his research. He quickly found them at the rising oil lobby.

Now the continuation of the story:

In October 1975, California-based inventor Robert Alexander introduced an improved powertrain for the car. As conceived by the inventor, such an electric drive was supposed to save car owners in the near future from the need to use burnt fuel, from unnecessary noise and from the need to constantly recharge the batteries.

The specialists who arrived at the demonstration were greatly puzzled, because it seemed that the energy comes "from nothing." However, the car drove easily without fuel at 36 miles per hour. To the doubts of the experts, the inventor replied that the car was driving, and her arguments were not interested. Initial power was provided by a converted 7/8 horsepower electric motor.

The electric motor has been redesigned to deliver 12 volts, otherwise the power output would be too much. Robert's sons and partner James Smith repaired the car in 45 days to demonstrate fuel and pollution-free driving.

The press was invited to the demonstration, and later (when patent US3913004 had already been received) one of the journalists was told the details of the project: the rotation of the electric motor starts from the battery, the hydraulic and air systems of the car. take effect until the battery has time to be charged from the generator. Alexander spent only $ 500 on this alteration.

Alexander and Smith were unable to fully explain how this energy is obtained from "nothing", however, they noted that people have long been able to do much more than they know and understand, and go far to find unnecessary examples - just look on this car that drives. The inventors called the demonstrated phenomenon “superpower” because it uses three types of energy to achieve this goal.

The design is based on a transformer (converter), which is also the rotor of a generator (crossed by a magnetic flux). The AC output is the result of two electromagnetic influences. Recall that the rate of change of acceleration - the third derivative of the coordinate - is a jerk.

The generator uses well-known technologies for controlling and interacting with a magnetic field. The converted and generated power are synchronously combined, resulting in increased output power.

In one of the machines created by the authors, which has four brushes and 20 plates and contains 20 sectors on the rotor, the primary windings consisted of several turns of conductor for effective rotation from 48 volts DC at 25 amperes. that is, 1200 watts were required to rotate at 1750 rpm.

At the same time, the secondary windings consisted of such a number of turns to effectively output 60 cycles per second (by conversion and generation) at 110 volts and 32 amperes, that is, the output could be 3520 watts.

Surprisingly, such a wonderful design of the converter of the machine by Robert Alexander - 1975 has disappeared from development, like the design of Nikola Tesla - in 1931. If you think logically, the possibility of the identity of these devices is obvious, just look at these figures:

Even Alexander's patent does not reveal the features of the complete design scheme. This diagram in a simplified version should definitely look like the figure below.

1-3 elements (battery, DC brushed motor, motor controller) are available in any electric vehicle. 4-5 elements (valve semiconductor rectifier, battery charge controller) are possible with an on-board AC power source. It was this scheme that was used on Alexander's electric car. In my opinion. Nikola Tesla had the same schematic diagram, the only thing he could not control the battery charging, from the alternating current phase on semiconductors. But it is possible to perform on the Fleming valves and on the gateway of the inductance controlled by an electromagnet. I think this "magic box" for Nikola Tesla was not a source. but a regulator.

It is logical that Robert Alexander repeated the combination with Nikola Tesla's electric car.