Existing Over Unity System - Holcomb Energy System generator  https://holcombenergysystems.com/. Device for obtaining energy by electromagnetic induction. To enhance the magnetic flux, a method of increasing the magnetic flux in electrical steel due to magnetic permeability is common.

All that was done by Dr. Holcomb is a solution of the original design: where the rotor was replaced, in a traditional electromagnetic synchronous generator with a constant source of magnetic flux (electromagnet), to a solid design, with dynamic switching of the number of electromagnets simulating the rotation of magnetic .

Note that in a synchronous generator, the dynamic rotor is replaced by a solid! There is no physical rotation of bodies, no physical speed.

It is proved that the generator is not a device for converting mechanical energy (Pk = F * v) into electrical energy (Pe = I * U).

If you look at the formulas, it is a statement of modern science, the enlightenment of this postulate - is a fact of the established concept of the absurd.

Ingeniously simple! Synchronous generator is the main source of electricity in electrical networks. Even easier for the household, instead of a mini hydroelectric power plant, windmill or solar panel complex, you need a small solid-state generator.

Dr. Holcomb not only voiced and formalized the idea in patents, but also embodied it in many existing designs. In addition, the device is used on a commercial site.

The question is what else needs to be proved? Trolls are brainwashing the nobility! Even if the gentleman decides to build this device, he will have to study the engineering method of construction. This is a seemingly simple method, without good knowledge and skills you can not master it.

I am glad that Dr. Holcomb was able to implement this idea. I can't believe no one has thought about it before.

The law of conservation of energy does not work in a solid-state generator system.

Magnetism and electricity can not be tied to the physical mass and physical velocity of this mass. Above I gave two formulas of power - mechanical and electrical.

This is the paradox of a device, a synchronous mechanical or solid-state generator. According to the introduction of electric excitation power and obtaining useful amplified power by the consumer, mechanical and solid-state generators are almost identical. We excite with less force, we get more. Amplifier is the ability of "magnetic flux" to accelerate - in the material of electrical steel.

This is a good pair of chapters. Although everything is in academic textbooks of physics. This is not a closed science, it is taught in all specialized educational institutions.

Conversion rates of solid state generators installed at a US facility by Holcomb Energy Systems. His reports and marketing publications show approximately a conversion rate of 2.0. Company Publication:

There is information that these generators as power amplifiers are already being supplied to customers from the USA. Measurements of conversion capabilities when measured by instruments recommended by NASA https://fb.watch/fMZMcgmLij/ 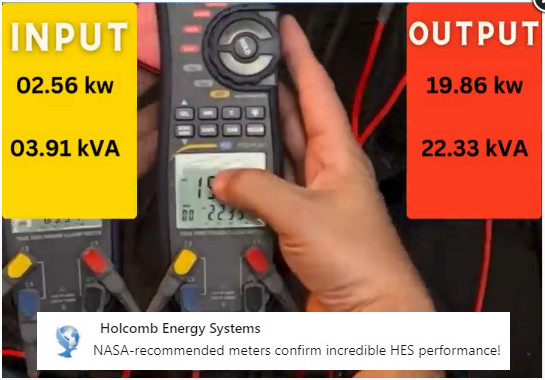